After months without posting I have decided to throw in a post as a therapeutic tool to deal with a dry socket.
I got my left wisdom teeth removed last week and it is something I would not wish on my worst enemy (but perhaps I would on Maná members).
The few hours after the surgery were an ordeal. I sat on the couch, overdosed on Vicodin, only to feel the most ridiculous pain I've ever had to endure. I threw an Haitian curse at my parents for having me. I cursed my dentist, his staff, their families and their pets. I was ready to die.
Then Ojos suggested taking Ibuprofen between my Vicodin dosages, and life was bearable again. I recovered my senses. Vicodin would put me out, make me feel like in a Trainspotting scene (I imagine Underworld music on the background), ibuprofen would carry me through my next dosage. And life was happy.
Then over the weekend I started to perceive a bad taste from the back of my mouth. I don't mean just bad-I-forgot-to-brush-bad taste, but really really bad I-just-got-McDondald's bad taste.... then slowly came the pain... and then the over the phone confirmation: I have a dry socket.
I have spent the last few minutes (or hours? can't really tell on this pain) googling on the condition and trying to appear productive. Optimistic articles say oain can last for a week, others mention up to 6. As my dentist appointment approaches I write this hoping it will provide some sort of relief, even if it's only the vent.
I don't know why the CIA hasn't tried this as an interrogation technique. Just extract a lower wisdom tooth, and let the suspect scream in excruciating pain. If I was f***ing dying on Vicodin (I mean, House M.D. takes it, it is DA SH*T), can't imagine how would it feel with no pain killers.
Then, to add some fun, take out the clot so a dry socket develops. I guarantee a 99% success rate in obtaining useful information for law enforcement (I leave the 1% in case someone like Sayid Jarrah actually exists).
Exquisite prose by Coller... at 13:55 36 comments:

This is the best robotics project ever. Kudos for these guys!!!!

Link to their project: http://pacman.elstonj.com/

Ojos got a nice job, its corresponding visa, and was accepted to two US top-20 MBA programs. This has several implications.

Not so great ones:

All in all the balance is absolutely positive. We completed this successful transition 6 months into our marriage. Keep it coming!

These past days have been rainy in CLT. The problem is that it isn't a real rain like in Mexico. It’s a little, tiny, light, but abundant rain… that has the additional quality of lasting all the freaking day.

It kills me. In Mexico it’s always a heavy as hell rain, but it only lasts a few minutes, couple of hours maximum. Several theories have been made around it:

Thanks for stopping by… I promise to write something worth reading one day.

It's always been clear to me that playing and appreciating tennis is the ultimate sign of evolution :)

Great image found in the signature of some folk who posts in MensTennisForums.com
Exquisite prose by Coller... at 13:54 4 comments:

Since life keeps happening whether you blog or not, here is a small list of updates...

1) I'm moving in two weeks to a brand new flat in South End, near Uptown Charlotte and Dilworth. It is basically 1 block from my current apartment, but the community has nice advantages: you can borrow a bycicle to go places (handy when you don't have a car), the interior design is awesome, we'll have a mini second floor, and we'll have many neat restaurants at less-walking distance.

2) Ojos is applying to MBAs. She will kick ass as usual.

3) The NC Music Factory opened at Charlotte, featuring "The Fillmore." Having a Fillmore here guarantees some decent concerts in the World Capital of Boredom (it's actually not that bad but the nickname sticked). First decent concert will be Collective Soul, August 28th.

4) I still haven't bought a car. Basically becaue I don't want more debt in my back (I'm still fighting the credit card debt from Mexico)... but sometimes I just want one so bad. For instance, each time I go to Wal-Mart, each time I think about going to Atlanta for a weekend... or Myrtle Beach! ...

Coming soon in the next post: something worth reading.
Exquisite prose by Coller... at 09:47 7 comments:

Life has been quite eventful in the last weeks, reason for which I haven’t been able to blog. Taking advantage of the unbearable lightness of Sunday, I’d like to post some of the stuff I’ve been doing lately.

1. Rent a car and drive to IKEA to buy a drawer for the bedroom and a nice bench for my beautiful 40’’ LCD HDTV.

2. Go to ByDesign to buy our living room!!!! It is a fantastic white leather sectional with an additional armless chair. It bloody rocks:

They played a very very very good set list with almost all of the big ones (they left Precious Declaration out), 3 songs from their upcoming album (Ed Roland said it would be ready for September) and a couple of not-that-famous ones and the newly famous Tremble for My Beloved from their 1999 album Dosage (it is newly famous thanks to Twilight… it is the only good thing out of that crappy movie –which I didn’t see, but I know it’s crappy-).

My wife got me a Dean Roland’s set list. Nice souvenir. 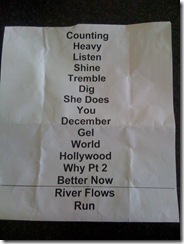 The only bad thing is that since it was a town festival, not all of the people was a lot into the concert… but once we got to the front rows it was a great atmosphere. A couple of action shots: 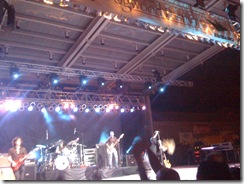 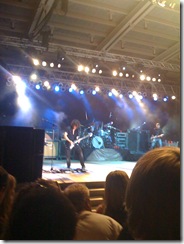 And the other bad thing was the 3 hour drive back to CLT… but it was well worth it :)

4. Kings of Leon!!!!!! Yeah!!!! First KoL gig for me and Ojos. It was brilliant, even though the place wasn’t full (illiterate southeasterners) and the acoustic of the place wasn’t great. Other than that, it was a great concert.

Brilliant! They only missed California Waiting.

A bad action shot here (we had all the lights pointing to ourselves for some reason):

We just received the CDs with the official wedding pictures!!!!!!! (By Enkuadre… hire those guys if you’re getting married around Mexico City).

Now comes the titanic task of choosing 200 pictures from 2000… but it promises to be a lot of fun. I’m of course creating a Picasa Web album for those!

Well… that’s it! thanks for stopping by.

Got a direct message from my fave band

Whatever, they claim to follow back all of their fans. I told them they weren't in my case, and Dean Roland from Collective Soul sent me a direct message to prove me wrong.

It doesn't matter if I ended up looking like an idiot. It still is a direct message from my favorite band, isn't it?

Let Me Google that For You

Ooooooooooobviously, there will be a post about my wedding, marriage and stuff. It was wonderful and married life has been great so far.

But that's not the subject of this post... "Let me Google that for you" is.

I'm sure that you know a lot of people who simply WON'T google and instead, they ask YOU how to do something. Let me Google that for you is a great educational tool so people will stop bothering you and start asking Uncle Google, who knows all answers.

Quick example. John Doe wants to know what a prompt in MicroStrategy is. Instead of googling it, he decides to ask Coller.

John Doe will now get his answer and will -hopefully- learn to google stuff. Amazing!

Coller...
Charlotte, NC, United States
Coller just married the most wonderful girl on Earth and together they try to survive one of the most boring cities on Earth. Coller is a technology, Formula 1 and tennis enthusiast. He also enjoys politics, as long as they have amusing characters like Fox, Palin, El Peje or Chávez.

A link to the past